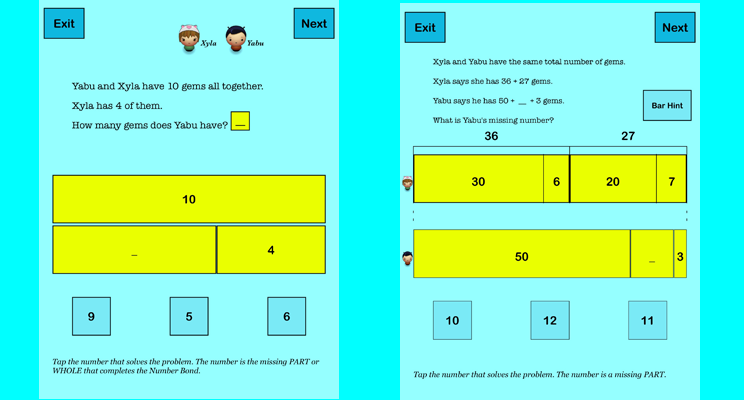 Xyla and Yabu, my second app, was downloaded over 5000 times in the last two days, which is encouraging. However, I have a few mixed feelings about this app compared to my others because my other apps work more elegantly.

Many of the children with whom I work are confused. They are trying to use bits and pieces of ideas without knowing how they fit together. Often what they’ve seen in texts or other learning materials have caused some part of the confusion. We want to help students understand clearly.

I’m going to interview myself about the Xyla and Yabu app and ask your opinion.

Interviewer (I): Why did you create this app, Karen?

App Designer (A): I wanted app activities that would both explicitly and implicitly encourage number sense by going a step further than number bonds to show graphically the “sizes” of quantities in relation to each other. For instance, 2 and 3 in relation to 5 have the same graphical representation as 20 and 30 in relation to 50. I also wanted children to see that if you understand how the numbers up to the sum of 20 work together in addition and subtraction, then you basically know the pattern for other numbers, especially if you can make 10’s and recognize multiples of 10’s.

I: Say something more about meaning and understanding.

A: For example, some of the children with whom I work really like Hungry Fish, a more expensive app with more exciting (and beautiful) graphics, in which you use your finger to move bubbles with numbers in them that add up to a designated sum together, so your fish can eat them and survive. I like Hungry Fish myself, but you could just use the idea that “5” and “3” go together to make “8” without understanding anything about what that means. There are many apps that do that already. What Hungry Fish excels at is a very simple but enthralling “story” that can motivate practice with basic math “facts.” But understanding requires something more.

I: So what do you see as problems with Xyla and Yabu?

A: The big issue for learning is that I have a couple of things going on in each page, one of which is mapped well graphically. I’m not sure about the other.

Some other representations in certain activities (see screenshot B with the bar hint shown) are better direct mappings of the words because they are not number bond bars.

Note that few read the text in apps, and the youngest children who first encounter this app usually are only beginning to read. They just look at the number bond bars and the possible answers and pay no attention to the text.

So, are the word problems useful, confusing, ignored, and/or only useful for some activities or problems? I’d appreciate thoughts, anecdotes, or data about your experiences with this app.

I: Given that the app does include word problems, do you really think you should give fake gems or beans to kids so they can act out Xyla and Yabu’s problems or come up with their own?

A: I personally wouldn’t give fake gems or beans to a whole class at once because of potential mayhem, but this would be a great idea for a learning center. Two children (especially younger children who are working with sums up to 20) acting out the word problems can more easily understand what Xyla and Yabu are doing with the gems. Also, if they can read and write a little, they can pose their own problems for other children to try and report back on. Sometimes students doing math for and with each other is a missing component in math education.

I: Umm, why did you name this app Xyla and Yabu and put those little characters and gems in it? (And why all the gems in your apps?) No one will ever figure out what this app is about from the name.

A: I was thinking about the variables x and y at the time, which in some sort of dream logic resulted in the names Xyla and Yabu. Stories are a good way of catching attention (though I don’t do much more than allude to a story background). I like the idea of these little guys obsessively trading gems and other things back and forth, which provides a motivation for working a lot with number bonds. These particular little character and gem sprites were available for me to use for free in programming, and the little characters are cute and a bit out-of-the-ordinary. Gems — people are always doing things with gems in apps, aren’t they? Yes, probably no one will ever figure out what any of my apps are about from their names, except perhaps Perimetarea.

I: Do you have anything else to say at this time?

A: I hope people will compare my apps Crate World and Perimetarea if they are interested in examples of my apps that more elegantly teach how math works — sometimes not in the order that math topics are presented in schools but so that they make sense progressively. (My other apps are more limited or have other purposes. *)

There are many, many nitty-gritty details that we should be talking about to improve learning materials (including Xyla and Yabu). Like many, I find myself returning to the Singapore Math Primary Mathematics text and workbooks as examples of good design for learning.

To improve education, we must be clear about the specifics of what any textbook, app, or other learning material does and does not do well and why. (Not usual in advertising.) Trying to do too much at the same time and not doing what is most important are too often accepted as good practice.

* Firedrake’s Gems is my first and simplest app — very helpful for introducing number lines and coordinate graphs. Math Scribble is a simple tool for drawing and writing your own math problems then erasing them. Gem Detector is a game predominantly, although it could be used for educational purposes.