Firedrake’s Gems, my first and simplest app, will always be FREE.

Each app in the bundle is available in the Apple store individually for the lowest possible price offered to developers (99 cents usually), but I would like more people to try all of them. 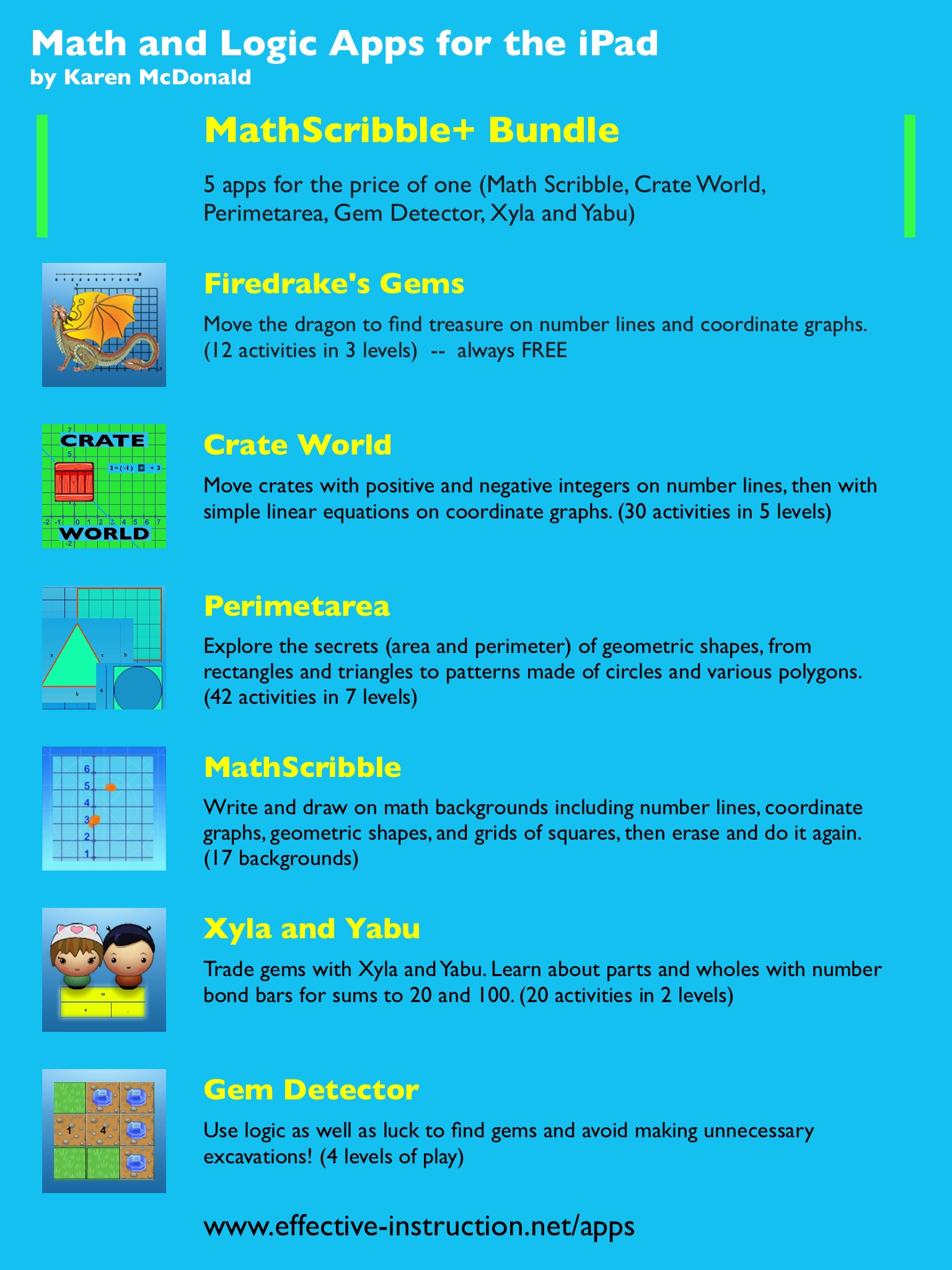 Privacy Policy: All of these apps are self-contained. None of these apps ask for or gather personal information. Ads will never be used, and there are no in-app purchases. The internet cannot be accessed from these apps.

Perimetarea introduces students to area and perimeter of geometric figures, showing how calculations for area and perimeter of different shapes are related because shapes are related. A background measurement grid is shown for many shapes to keep students aware that area is composed of square units. Students compare shapes with the same base and/or height (or for circles, a diameter with the same measurement) and practice working with more complex figures gradually, including shapes that are rotated in space or that are included in patterns made of shapes. This app has 7 levels (Rectanglia, Trianglia I, Trianglia II, Quadrilatria, Polygonia, Circlia, and Compositonia), which include 6 activities in each level.

Math Scribble is a set of 17 different “pages” with math backgrounds on which students can draw and write labels and equations with a finger or stylus, then erase and start again. I’ve included horizontal and vertical number lines, coordinate graphs, block of squares, rows of blocks, and other backgrounds that I’ve wanted available for my own work with children. This is a very simple app. It uses only one color (orange) for drawing and writing. Erasing gets rid of all work on a page. Math Scribble does not save images (although it is possible to save an image by using iPad commands).

From Integers to Linear Equations

Crate World is a simple, reasonable, and consistent (albeit oddly single-minded about crates) world in which numbers are used to move crates distances and directions.

First, many of the activities in Crate World can be used as stand-alone exercises to fill in gaps for students who, for example, may not understand or remember what are often presented as rules to be memorized for operations with integers or may be fundamentally confused about the relationship between points on a coordinate graph and linear equations.

Second, Crate World is my attempt at re-envisioning math instruction for a circumscribed set of topics. Some of the best math materials are hands-on, incremental, and simple, and depend on meaning and understanding primarily rather than on rote learning. Better math materials also reduce excess and sometimes misleading verbal explanations by providing better teaching examples and more immediate cues and feedback to direct better choices and understanding. I hope students will feel more confident and interested in math because of their experience with Crate World!

From Number Lines to Coordinate Graphs

Some young kids learn to play chess or write computer programs. At some schools, these accomplishments are taught in clubs, so all kinds of kids think these intellectually satisfying activities are fun. Would more kids enjoy math if it seemed like something that they could learn and use themselves and with friends to do interesting things?

The first levels of Firedrake’s Gems ask kids to find treasure by identifying points on horizontal and vertical number lines, then to add and subtract to find new points where treasure is hidden. Higher levels ask students to do similar tasks to find treasure using coordinate graphs. First and second graders don’t need to go to the higher levels of this app, but I am curious if young students may want to try coordinate graphs if they have the chance to play with them outside the standard classroom curriculum. This app is free and will always remain free.

Number Bond Bars for Numbers 1 to 100

Young children are naturally fascinated by patterns. If we give them the opportunity to find and use patterns, will they develop deeper understanding?

Xyla and Yabu trade gems back and forth starting with numbers to 20 (adding and subtracting first in increments to 10), then moving to numbers to 100. Patterns of numbers in adding and subtracting are repeated for larger and larger numbers. If we can add 3 and 4, we can add 13 and 14 or 23 and 64 or 30 and 40. And if we learn about making and decomposing the number 10, we can use that chunk of information, the ten (and the hundred and later the thousand, etc.) in all sorts of helpful ways.  And if we know about addition, we really know about subtraction, if we see how they are related and have opportunities to move back and forth between adding and subtracting flexibly.

The particular form of number bond used in this app gives us one representation of wholes and parts, which are concepts useful for thinking about many topics, math and otherwise. The bars representing the parts, which change in size relative to other numbers, show graphically how numbers are related to each other.

I was trying to understand how the game Minesweeper works, and I decided to make an app that uses some of the logic of Minesweeper but doesn’t stop the game and “blow up” if you touch a square that happens to have a hidden mine in it. (It’s not too difficult to make a mistake in Minesweeper, because both luck and reasoning affect whether you touch a hidden mine.) It took me months, off and on, to figure out some of the programming needed to make Gem Detector work differently.*

In Gem Detector, you get information and no explosions — a red dot if you choose to excavate a square when you have evidence that you shouldn’t choose it. A red dot doesn’t seem too daunting for those who are learning the game but may not be exciting enough for die-hard Minesweeper fans.

*David Such’s wonderfully helpful Codea Tutorials include his program for Minesweeper, which started me off on the right path.

I have been using the Codea app on an iPad for programming. I love working with it and try to promote it by including the Made with Codea screenshot in my apps.

Why and How I’m Making Apps

I have started developing apps because I can’t find what I want for some topics in my work with children. (Also, I want to play with programming.) There are many apps that are fine for many purposes, but some are expensive, some require manual dexterity and speed, some skip some steps needed by many children for better understanding, and some are primarily for practice after children understand (or don’t understand) particular lessons.

We can learn much from good games.

We can learn much from good games. Once children are introduced to an app, they should be able to improve their learning and performance if they use the information on the screen like they would in a superior video or digital game. However, I’ve seen that many children don’t seem to believe that information they learn in school makes sense. They may depend on guessing or other less productive strategies for school but not for the things they think are really meaningful — like sports, video games, or other activities they may gravitate to if they encounter them under conditions that help them to become successful.

I want to make apps that make learning of the most important meaningful units and chunks of units for a topic easier, by using a game-like format and including incremental steps, recognition decisions, and feedback, which provide a meaningful context in which to make decisions and learn how to make better decisions.

One of my inspirations was the boxes or shelves of learning materials in many Montessori classrooms. Children choose or are guided to work with materials, which are organized by content and level of difficulty. Children are shown how to use materials, which they then explore or use for particular goals on their own or with another student, who can act as another source of information and feedback. Often kids can work together to understand new things, even when each alone may have difficulties.

Another inspiration, increasingly seen in U.S. classrooms, is the learning center, often a small table with an activity or set of activities of increasing difficulty that students rotate through over a period of time.  Often two students will work together, taking turns and offering suggestions and help to each other.

Within the mix of classroom or home activities, a good proportion should allow for thoughtful, engaging, and (relatively) quiet work, for which apps are not always known.  Children also need to learn to evaluate and improve their learning. Despite what I think we can learn from well-designed video games, I’ve chosen not to include saved scores. Instead, teachers or parents can download pencil and paper Activity Checklists for these apps that kids can use to track their progress. (Learning to use and make lists in completing projects is a useful skill.)

How Much Guidance Do Children Need?

Do we need to tell children everything about a topic before we let them try an app or a new educational activity? Would as many children enjoy games if we presented the rules didactically and asked them to learn every rule by heart before they start playing?

None of kids’ work with apps (or worksheets or any other classroom material) should be done in a human or instructional vacuum.

None of kids’ work with apps (or worksheets or any other classroom material) should be done in a human or instructional vacuum. Kids should be working with other kids and with adults, trying other ways of doing things, and in a timely fashion, developing the prerequisite skills for starting to use an app and the bigger conceptual picture of which an app can only show a part.

Children need an appropriate level of guidance as a part of enjoyable interaction with others, adults and other children. Otherwise, we have many children who say, “This is boring,” because they can’t even imagine that they might find something new and different interesting or because they don’t want to try and fail at something new. Many children will fail at new endeavors, in fact, if we don’t point out what is important and how to do something and then how to do that something even better. We just may not want to do all of this at one time. We also should set up activities so that what is important is not hidden.

I’ve tried to make what happens in my apps clear, but just as in any game or new activity, some initial guidance will be helpful for most children. Kids who have some background in a topic will always have an edge, so it’s useful to know what kids already know and don’t know.

If kids don’t know the meanings of parts and whole in reference to numbers, it’s helpful if they can understand these concepts in a wider and more natural context before they encounter them in math or in an app. Kids need opportunities to see, hear, use, and come up with their own examples of parts and wholes in the world around them before trying to work with number bonds.