A simple example illustrates the importance of working memory for particular academic tasks. Try adding 3 and 9 in your head. That was probably easy for you. Now try adding 33 and 99. That was probably more difficult. Finally, try adding 333 and 999. This is quite challenging for most adults even though each calculation required is trivially easy. The challenge occurred because you need to store extra information and this taxed your working memory. If your working memory capacity was exceeded, you could not complete the problem successfully.

Holmes, Gathercole, et al. (2010). Working memory deficits can be overcome: Impacts of training and medication on working memory in children with ADHD*

Who but an experimental psychologist would expect anyone to remember anything as silly as unrelated digits without the aid of paper and pencil? Better yet, why would anyone ever have to remember such sorts of things without writing them down? The mind is well equipped to retain large amounts of meaningful material, as long as the material has pattern and structure. It is the meaningless, arbitrary stuff of modern life that gives so much trouble. Sure, it is often easier to remember something than to carry around and consult written records for everyday tasks, but why must these things be so meaningless, so arbitrary?

The mind is well equipped to retain large amounts of meaningful material, as long as the material has pattern and structure. It is the meaningless, arbitrary stuff of modern life that gives so much trouble. (Don Norman)

Humans can make things complicated, or they can make them simple. To simplify requires thinking clearly.

Algorithms that lay out a series of steps to solve problems are often helpful. However, they are not always needed. 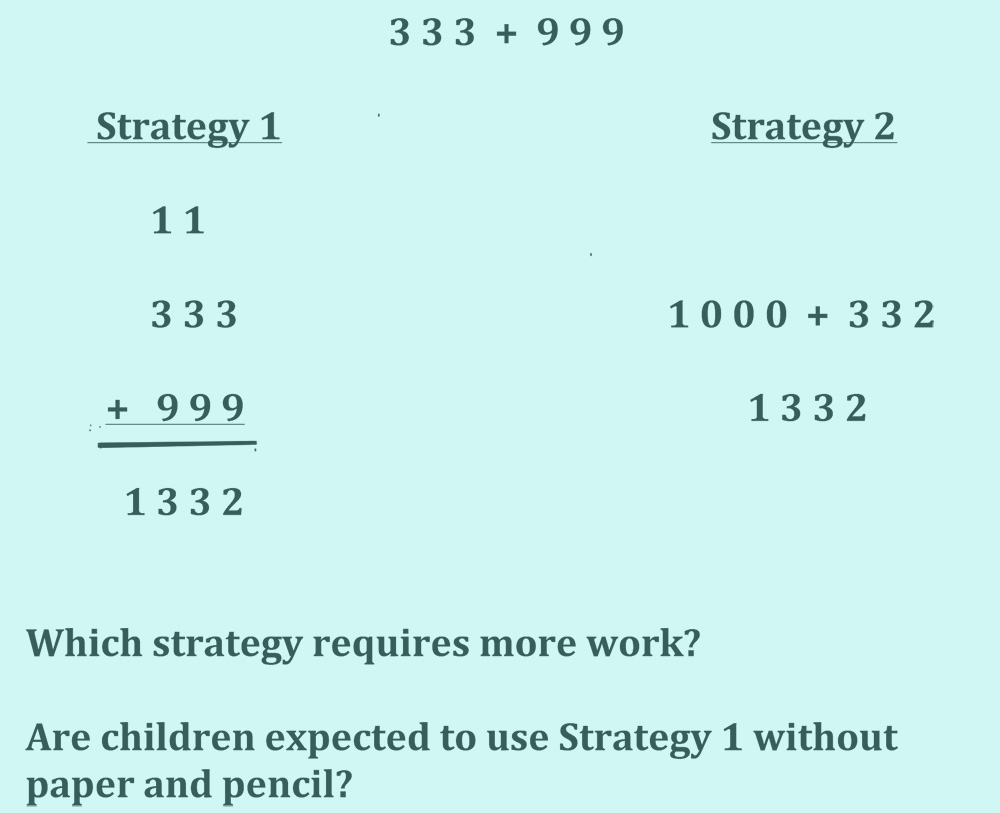 1. Add 333 and 999 with the standard addition algorithm traditionally used in the U.S. Add each column from right to left: first the ones, then the tens, then the hundreds, regrouping at each step as needed.

Strategy 1, which is the one most of us grew up with, depends on a student acting like a calculator following steps in a specific order. It is not even necessary to understand much about numbers in order to find an answer. A student could answer this problem correctly or incorrectly without understanding much about the relationships between the number quantities. In fact, many students make substantial errors in solving similar problems; often students are not be able to make a good estimate of the answer beforehand. Yet, if students understand what they’re doing and why, the standard addition algorithm is meaningful as well as useful. Without writing numbers down, however, the memory load is substantial.

Strategy 2 requires many fewer steps and much less memory load. Many calculations can be made simpler and easier by substituting related, more manageable numbers. Using the standard addition algorithm is overkill for this set of numbers.

Paradoxically, Strategy 1, the standard addition algorithm method, can be used with little thought once you know the algorithm, IF you are able to work out your calculation on paper.

In comparison, making a decision as to the best strategy for a set of numbers may require some thought, but many calculations are quite easy to do without paper. Once you have a repertoire of strategies, you often can work with numbers more easily and more elegantly.**

I suspect that more teachers than researchers recognize that the numbers in the example are not difficult to add. That is, they are very easy to add if a student has been taught and has been using mindful approaches, which depend on developing number sense and understanding properties of numbers.

If one believes that many subjects can only be learned through intensive memorization and use of unassociated bits of information, then it makes sense to spend many educational dollars in separating and training students to remember another bit or two.

Unfortunately, neither educators nor cognitive psychologists are universally conversant with better teaching methods. If one believes that many subjects can only be learned through intensive memorization and use of unassociated bits of information, then it makes sense to spend many educational dollars in separating and training students who appear not to have the requisite working memory capacity needed to learn school subjects.

But given better ways of doing things, does it really make sense to spend all those dollars in this way?

As cognitive psychologist Don Norman (author of one of the first textbooks about information processing) notes, “The mind is well equipped to retain large amounts of meaningful material, as long as the material has pattern and structure.”

Humans have limitations. Even though some of us may be able to hold a few more digits in mind at a time, all humans are prone to error as complexity and lack of meaning increases. Nearly all of us have some subject that seems beyond us. All of us can benefit from better teaching. So how do we make education in all subjects more friendly to human beings?

In books with titles like The Design of Everyday Things, Things That Make Us Smart, and Emotional Design, Don Norman has described how we can make complex matters appealing and easier to understand by applying principles from cognitive psychology. Let’s start with one common sense suggestion that is not used as consistently in classrooms as one might expect.

Is there much to remember? Many directions? Do students need to work with complicated information? Write it down. Make it visual. Organize it. We humans perform better when important details are literally in front of us and when they are organized so that the important information is clear.

And if there IS much to remember, we need to analyze what we’re doing and why. Can we use better design to make complex things more simple and important things more memorable? (Usually we can.)

** For example, here are a couple of calculations that at first glance might seem to require a bit of work:

For more about interesting, useful, and thoughtful ways to work with numbers — Young Mathematicians at Work: Constructing Number Sense, Addition, and Subtraction by Catherine Twomey Fosnot and Maarten Dolk.

However, even meaningful ways of doing things can seem meaningless if presented in ways that confuse students or make new knowledge appear to be arbitrary “tricks.” To ensure that these and other ways of working with numbers are more than tricks requires deep understanding on the part of teachers.