Me: “Is this true? 5 equals 5.” I write on a whiteboard on the table between me and several 2nd grade students:

2nd grade students, after a few seconds hesitation: “No, that’s not true.”

2nd grade students, in a rush: “You have to have 2 numbers on this side and 1 number on the other!”

Me: “How about this?” I put two nickels on the white board, with an equal sign between them. “Does a nickel equals a nickel?”

Several years ago I had this conversation with three young students. I don’t believe they were confused about something that they had been directly taught in a clear and careful manner. They were incorrect because often we believe that our materials are “good enough”. Somehow everyone, myself included, took for granted that they and other students understood the meaning of “equal” and in particular how the equal symbol is used in math equations. Instead these children had used their powerful human cognitive ability to find a pattern and used it to figure out (wrongly) what “=” means.

So how might these students have come to believe that 5 = 5 was incorrect?

Whatever our age, we humans assimilate and accommodate (Piaget’s terms) new information like a young child learning about balls, blocks, birds, and plants — through experiences.

Whatever our age, we humans assimilate and accommodate (Piaget’s terms) new information like a young child learning about balls, blocks, birds, and plants — through experiences. Whether children will think that 5 = 5 is correct and understand equality in the future depends on whether they encounter:

Children’s Construction of the Meaning of Equality

In mathematics, equations are statements of equality: expressions on each side of the equation represent the same quantity. Vocabulary is an issue. Students must understand what equal means, but lessons and textbooks do not always describe equality clearly. If there is a definition, it often does not build upon the experiences and words that students already understand.

So what may students think the equal sign means? Teachers have found that students may use “=” as a signal that they should find the answer, particularly if students have “answered” many equations written in the form 2 + 3 =__.   This understanding is only a vague approximation of what we understand as “equals.” In the short-term, many students may solve many problems well despite this confusion; other students may not.

Sometimes children do not hear words like “equal” consistently and may follow the examples they hear. Kids who most often encounter equations as “number facts” may think the equal sign represents “is,” as in “2 and 3 is 5.” Even those who do hear “2 plus 3 equals 5” may not be asked to use this kind of wording themselves on a regular basis, or if they do use it, they may or may not understand it. 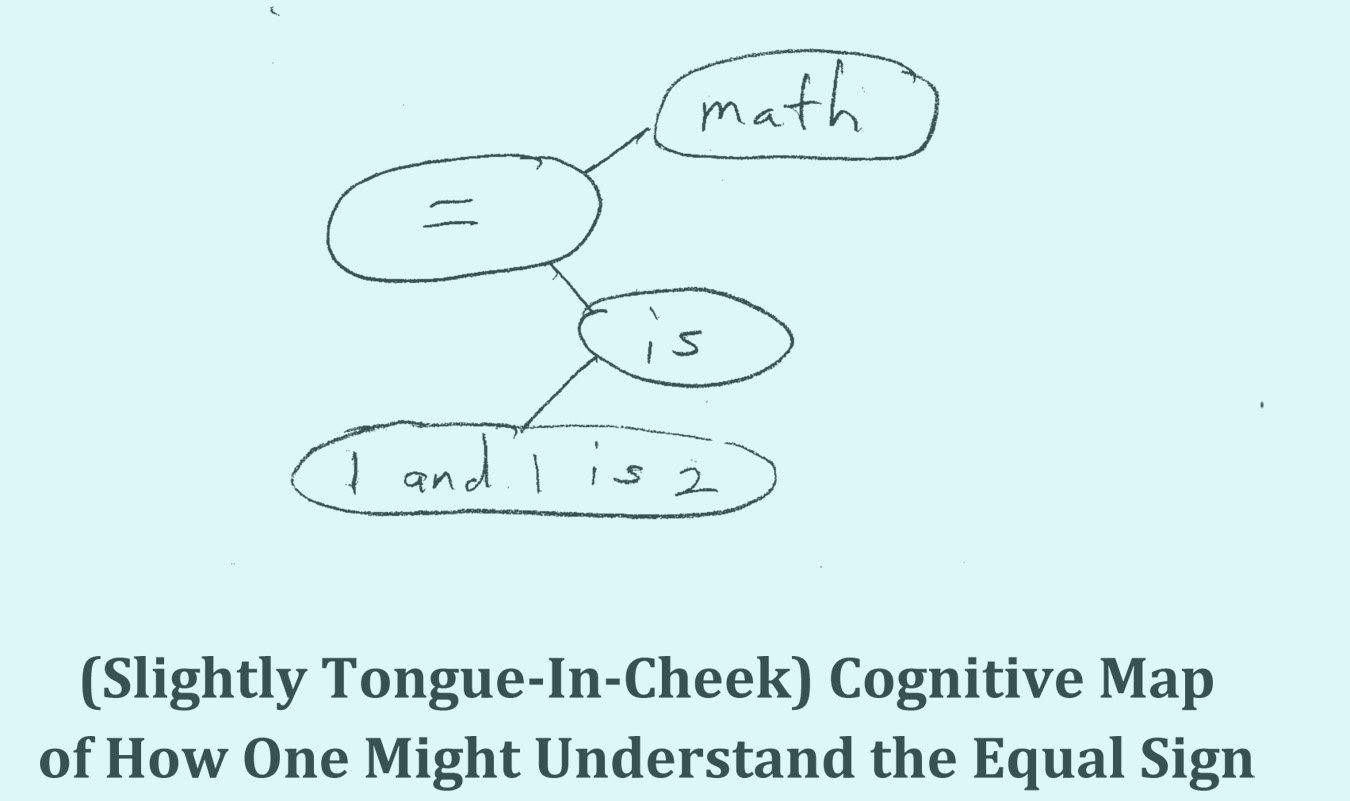 Students who do not understand equality are also unlikely to have had a wide range of experiences with equations. They may have seen many equations of the form 2 + 3 = 5, often called number sentences, but few if any alternative forms such as 5 = 5 or 5 = 2 + 3.   With this inadequate set of experiences, children may come to believe early that there is one right way to write an equation and that others are wrong. By providing only one form of equation or any other concept, schooling may actually make students inflexible and decrease their ability to make sense of the world. It’s as if small children were only exposed to one kind of ball, a ball that doesn’t bounce, and yet would be expected to know about all kinds of balls.

By providing only one form of equation or any other concept, schooling may actually make students inflexible and decrease their ability to make sense of the world. It’s as if small children were only exposed to one kind of ball, a ball that doesn’t bounce, and yet would be expected to know about all kinds of balls.

Children also may be misled by their inborn ability to detect and learn syntax, which they may try to apply to things other than language. Syntax is “the arrangement of words or phrases to create well-formed sentences” (Oxford Dictionary of English). Unfortunately, for their understanding of math, the children I talked to had come to believe from their experiences with equations that they can only be written in certain ways correctly: you can put two (or maybe three) numbers on the left side of an equation, but only one on the right side. They also thought only numbers and not objects, like nickels, could be used appropriately with an equal sign.

In the long run, students who do not understand the equal sign will have more difficulties as they progress to higher math. We may think that my students’ misunderstanding was uncommon, but many students need to correct a similar misunderstanding as they begin learning algebra formally in the upper grades:

The change from an arithmetic to an algebraic perspective requires a new way of thinking about both the equals sign and the arithmetic operations in the equation. The equals sign must now be used to express a symmetric relation of equality. Reed, Word Problems. Research and Curriculum Reform, 1999, p. 96.

If students need to develop “a new way of thinking” in order to understand equality in equations in algebra, then misunderstanding of the equal sign is common!   Certainly students who don’t understand 5 = 5 will have difficulty following the logic of solving an equation:

Without understanding that expressions on the two sides of an equation can remain equal through using appropriate operations with the same quantities, algebra students may just be manipulating numbers, following a set of steps that have been modeled by their teacher. By not introducing the proper concepts clearly early, we make further learning less simple in the future. The student who has always understood equality in equations can continue to build upon this basic understanding. The student who did not learn about equality early either must reorganize his thinking so that he can make sense of both past and present learning, or he might avoid meaning and rely on his rote memory for algorithmic steps.

If students are to develop a long-term correct understanding of equations, they must understand equality both in general and in its specific meaning in math. Just as children must have experiences with balls, blocks, and other objects that help them remember their names and make their meanings and functions clear, students must have similarly rich experiences with numbers, quantities, and equations.