“In science, they just call things different names that you have to learn. You could call something a blooky-blook, or you could call it a mooky-mook. It doesn’t matter. They’re just a bunch of names!”

A good story captures our attention and imagination. We want to learn more about what we have heard and seen.

Science is a thrilling story that is often presented to students as if it were a lot of unrelated and perhaps even boring bits and pieces.

Science is a thrilling story that is often presented to students as if it were a lot of unrelated and perhaps even boring bits and pieces. “Laura” was disgusted with science because of her experience with what seemed to her to be mostly arbitrary names and classifications of things.

But what if these details were presented as part of a meaningful, fascinating, and accurate story? All of those seemingly random details would compose a framework of ideas for current and future exploration.

The Universe — A Story That Is Also Science

When you were outside today what did you see? (Let students tell you.) This is a story about how everything came to be. A long, long time ago there were no people, no animals, no birds, no insects, no life on Earth at all. There were no waters to fill the seas, no trees to fill the forests, no air to fill the skies. There was no Earth, no Sun, no stars at all, no Milky Way – there was nothing and it was very cold. Actually there was something. It was a potential or a secret waiting to be told. Have you ever waited to surprise someone? Everyone is so still – an energy waiting to happen. Or think of when you were ready to jump up. Your legs are tense. This was the singularity. It was like a secret waiting to be told. It held a great power.

Now close your eyes and become very still. Now open your eyes and what do you see? Close them again and open them quickly. This is how our Universe was born. There was nothing and it was very cold and then there was everything and it was very hot. There was light for the first time.[candle] This candle represents the first light. The light came from radiation or photons, the particles of light. There were also particles of matter – the protons and neutrons and electrons and antiparticles. Now when scientists say everything appeared, they only mean these infinitesimal or very small particles; they do not mean that planets and couches and animals appeared. Our history began right then and continues even now into the future.

The Universe was very small and very hot. Particles were crashing into one another. They were wild and free and obeyed no laws. When the particles crashed into each other, they annihilated each other with a burst of energy called light. This picture is what it probably looked like. Clouds of matter with bursts of light where energy was given off.[photo] Luckily for life, the Universe was expanding and as it expanded it cooled just a bit. As it cooled, the particles of matter began to develop laws. The force appeared and the protons and neutrons began to slowly come together and formed the first atoms. 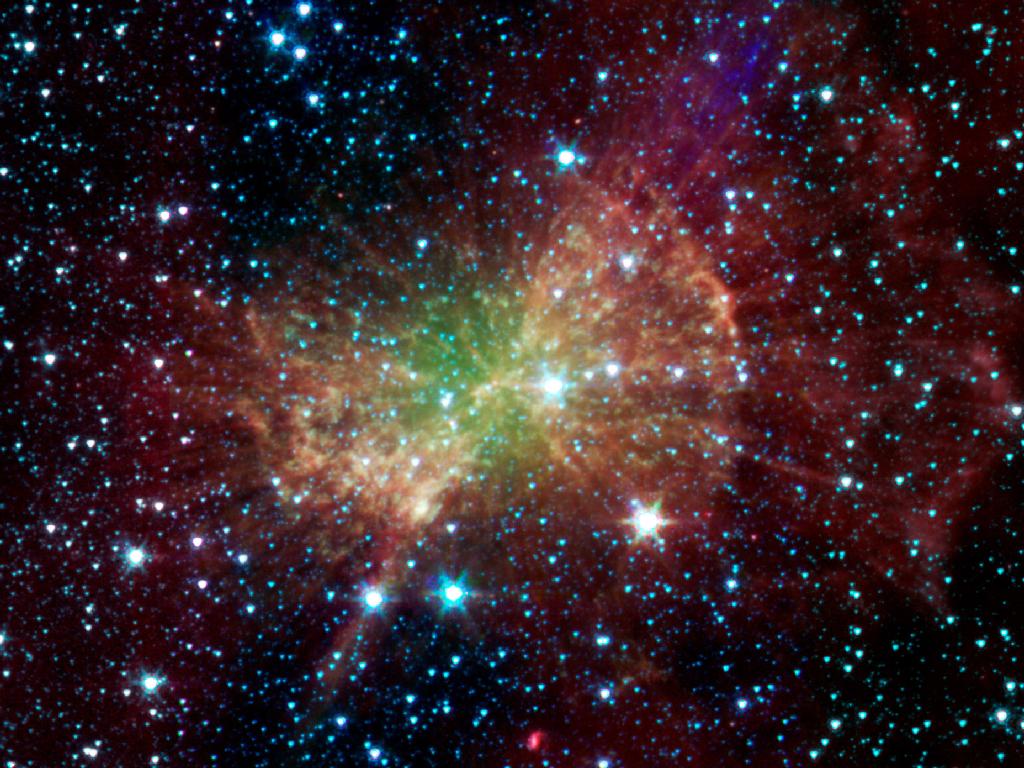 This Great Lesson is from Barbara Delinsky’s website. Barbara is a long-time Montessori teacher who describes how she revises and improves her versions of Great Lessons as she reads and learns more about current scientific understanding. Each of the details in the story is chosen carefully. Words and concepts — such as singularity, particles, forces, matter, and energy — introduced within the story can be revisited and explored further in future re-tellings and discussions. So for whom is this story meant?

Each of the details in the story is chosen carefully. Words and concepts — such as singularity, particles, forces, matter, and energy — introduced within the story can be revisited and explored further in future re-tellings and discussions.

The Great Lesson is presented for a class of first, second, and third graders on the first day of school. The teacher sets up the environment beforehand with simple and appropriate music, lighting, and seating for students. Materials used in the presentation are made available in the classroom so that students can explore parts of the story and their meaning for weeks afterwards.

In comparison, I remember my own first grade experience. My teacher said that we were going to (what I heard as) the “laboratory” after lunch. Excitedly I told my mother that I was going to get to do science experiments. I was very disappointed when I realized that we were only going to the bathroom (the “lavatory”) on the way back from recess. I don’t think I ever learned anything about science in school that year. And much of what was presented in school afterwards was the mundane, the piecemeal, and the forgettable.

How different is kids’ experience with science in schools today? Although things are much better now in many classrooms, unfortunately, too many kids still are disappointed by what they learn about science in school. And often they don’t even know that there is reason for them to be disappointed. Many kids never understand that science is an amazing way to explore all that is around us. Opportunities to generate and nurture interest and understanding are ignored or lost.

Fortunately, science CAN be a story that kids want to hear and to pass on to their family and friends!

If you would like to learn more about Great Lessons, Barbara Delinsky’s website is a wonderful place to explore.